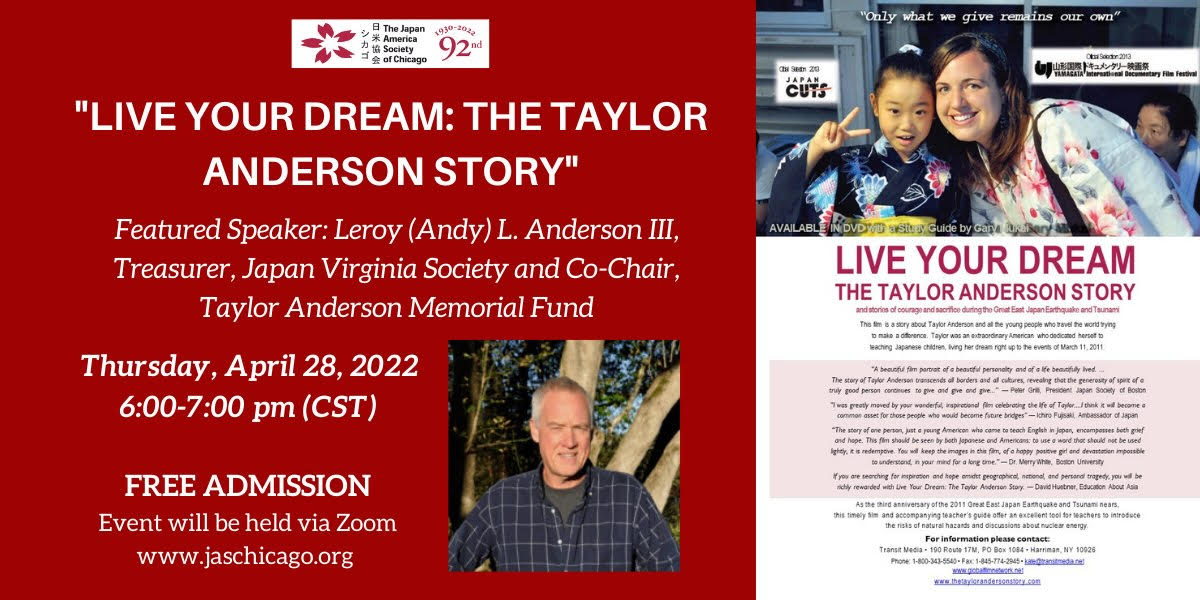 Andy will speak about Taylor’s love for Japan and how her family learned that love from her, the strong response of JETs who considered Japan their second home, the founding of the Taylor Anderson Memorial Fund and its activities since 2011.

The Japan America Society of Chicago continues to commemorate and bring awareness of the events surrounding March 11, 2011. All those affected will always remain foremost in our thoughts and prayers. Leroy (Andy) L. Anderson, III served as President and Treasurer of the Board of Millwood School, and has been a board member of the Manchester YMCA since the mid-90s where he sponsored the Pella Virginia Skate Park, The Anderson Family Welcome Center in Honor of Taylor Anderson and chaired Annual Giving and capital campaigns. He also serves as Treasurer of the Japan Virginia Society and is Co-Chair with Ambassador Ichiro Fujisaki of the Taylor Anderson Memorial Fund.

Taylor was a JET (Japan Exchange Teaching) Programme teacher when she perished in the March, 2011 Great East Japan Earthquake and Tsunami. The Taylor Anderson Memorial Fund was founded in Taylor’s honor by Andy, Jean, Julia and Jeff with the help of Taylor’s high school alma mater, St. Catherine’s School. The fund, with the advent of Toho-Towa’s promotion of the film (www.thetaylorandersonstory.com) registered as a Japanese NPO (www.tamf.jp). The initial board meeting of the fund was in December, 2013 in Tokyo

The purpose of the Taylor Anderson Memorial Fund is to help students, schools and families in the Ishinomaki area recover from the earthquake and tsunami as Taylor’s family and the board of director’s expects Taylor would have wanted and to pursue Taylor’s dream of being a bridge between the U.S. and Japan. The fund continues to work in Ishinomaki with the 24th “Taylor Anderson Reading Corners” just completed.